Caution - proper planning needed when upgrading vSphere to 5.5 U3b in environments with SRM and Horizon View

Back on December 8, 2015, VMware released v5.5U3b for vCenter and ESXi. Typically, such minor updates are fairly straight forward. However, this update includes a fairly significant change which requires more thought and planning than most.

As part of this update, the SSL v3 protocol is being disabled by DEFAULT upon installation which could have a significant impact on your environment depending on the installation/upgrade sequence you follow and the potential VMware and 3rd party products that still rely on SSL v3 in your environment.

Two such products from VMware that could be affected include Site Recovery Manager (SRM) and Horizon View.

SRM
If you have SRM running in your environment, you need to make sure you have installed and are running SRM v5.8.1 or greater BEFORE you upgrade to vSphere v5.5U3b. SRM v5.8.1 and greater do not rely on SSL v3 and thus will not be affected by the upgrade where earlier versions of SRM do require SSL v3.

Horizon View
If you have Horizon View running in your environment, you need to make sure you have installed and are running View v6.2 or greater BEFORE you upgrade to vSphere v5.5U3b.  View v6.2 and greater do not rely on SSL v3 and thus will not be affected by the upgrade where earlier versions of View do require SSL v3.

Also, as part of vSphere 5.5U3b, the version of VMware tools included with the release is v10.0 which is not supported on any version of Horizon View currently. See the Interoperability Matrix information below.

3rd Party products
If you have 3rd party products which connect to either vCenter or ESXi hosts directly, you should confirm if the version running in your environment requires SSL v3 before upgrading to v5.5U3b.

You may notice the Interoperability Matrix shows VMware Tools (downloadable only) and according to the v5.5U3b release notes, VMtools v10.0 is included with this release. So, it's important to not upgrade VMtools within your Horizon View environment to any v10.0 at this time. 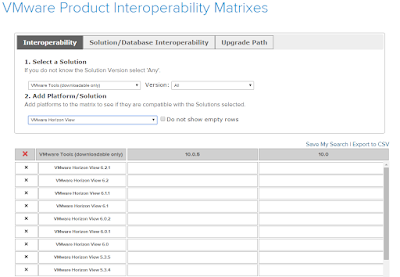 The opinions expressed anywhere on this site are my personal opinions. Content published here is not read or approved and doesn't necessarily reflect the opinion of my employer.